If you belong to a tactical community, participate in driven hunts, or thinking seriously about home defense, or just following trends, you have probably heard about LPVO (Low Powered Variable Optics). Over the last few years, the low power variable optics (LPVO) became the go-to option for close-up, fast-action shooting but also for shooting at mid-range distances.

However, there are few drawbacks, such as the price, clarity and eye relief.

Except for the top shelf LPVOs, the budget-level low powered scopes still lack visual clarity at 1x compared to the reflex sights. Furthermore, the LPVOs, because of a small objective lens, are not the best at light transmission and request for a proper cheek weld and eye relief.
To summarize, though the LPVOs are versatile and getting better and cheaper every year, they are not for everyone.

That is where non-magnified optics came in, and most of you tend to think of red dots and holographic sights. However, this content would be turned towards prismatic sights or prism scopes beginning to gain traction in the USA.

We have prepared this Primary Arms Cyclops review to offer the perfect choice for numerous fresh owners of defensive/fighting carbines who want a feature rich, high-density glass optic at an attractive price point. 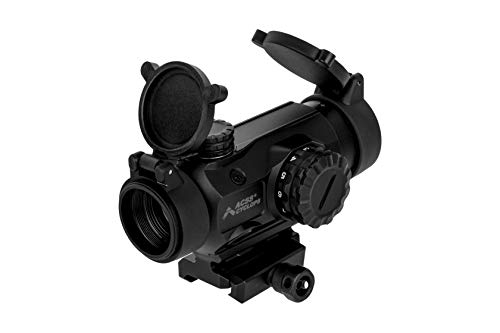 Unlike traditional rifle scopes using a series of lenses to focus light on a point, or red dots using mirrors to project a dot inside that optic, Primary Arms Cyclops 1x Prism scope uses a roof-prism optical system to focus the light to a specific place.

On the other side, compared to other magnified scopes, the roof-prism optics like the 1x prism Cyclops scope from PA has a clear, uncolored lens with glass quality depending on price range and manufacturer standards.

Primary Arms’ new prismatic scope offers decent clear glass that perfectly fits a price point of less than $250.
While the PA Cyclops glasses have no edge distortion and the sight picture is clear and free from blurring, looking at some entry-level options, you’ll find tiny blemishes inside the optic.

Compared to a Trijicon ACOG, as a benchmark for prismatic sights, PA glass is not top tier, but roughly it has 80% of the ACOG’s performance.

The main difference between reflex sights (red dot and holographic optics) and prismatic sights is that the latter do not require any batteries to operate.

At the Cyclops model, Primary Arms Optics has employed their highly regarded, repeatedly-proven two-part ACSS reticle, which is standard on a lot of Primary Arms’ offerings.

Usually, the ACSS reticle is described as an outer ring that surrounds the heavy horseshoe in the center. In a CQB configuration, the familiar horseshoe will allow you to quickly get quick hits on-targets, while the horseshoe’s outside edges can be used for moving target leads.
When speed is less critical, and you need better accuracy at further distances, you can use a subtle center chevron.

The illuminated chevron tip with a BDC built into it came in mighty handy, providing a precise point of aim that won’t cover the target.
Though markings induce for a somewhat busy sight picture, this instinctive sighting system is easy to use, making shooting at 12-inch circular plates at 300 yards easy as well.

The ACSS reticle in the Primary Arms Cyclops has 11 illumination settings powered by a Li-ION CR2032 battery. Unlike red dots, these electrically illuminated optics have quite humble battery life, and PA Cyclops isn’t an exception.

But it would be best if you weren’t anxious with the claimed 3,000-hour battery life since the etched reticle will still work with a dead battery and will give you a good P.O.A in the daytime at least.

The overall build quality is what you’d expect from Primary Arms Optics, i.e., it is built to last, and you can be rest assured that Primary Arms’ lifetime warranty backs up the optic.

Cyclops prism scopes undergo rigorous field-testing during development to keep its zero and functionality in harshest conditions like all PA products.

The Freezing and Waterproof Test!!!

The manufacturer even sends the engineering test sheet to explain how the scope was tested before it was shipped out to customers.

We all know ACOG’s prism sights are considered some of the best in every aspect. While Primary Arms 1x Prism Scope might not be ACOG-level tough, the compact Cyclops, at just 9.7oz weight, offers similar build quality and durability.

As for the recoil resistance, the Primary Arms 1x Cyclops is rated for shotgun use, and this optic will handle the repeated recoil of an M1A chambered in 7.62×51. In fact, during durability testing, the PA Cyclops outlived two semi-automatic 7.62×51 NATO (.308 Winchester) rifles.

The main body of the Primary Arms 1x Prism Scope has a waterproof construction and it is nitrogen purged for fog resistance.

We wanted to test the scope`s endurance in home conditions, so we immerse this prism scope in a large bowl of water and then left in a deep freezer for more than 48 hours; after that, we put it into an oven at 170 degrees for 30 minutes.

While the other red-dot sights were dead right there, when we powered up the Primary Arms 1x Cyclops, the scope displayed a bright, crisp reticle.

Prismatic scopes with an illuminated reticle are ideal tools for mid-range and fast-moving targets and depending on magnification; they can be used up to 500 yards.

The simplified ACSS reticle from Primary Arms is calibrated for multiple calibers, enabling bullet drop compensation (BDC) for accurate shooting with 5.56 NATO, 5.45×39, 6.5 Grendel, and 7.62 NATO out to 400 yards. Additionally, these ranging hashmarks were relatively easy to adjust for different calibers, such as 7.62x39mm.

Despite the rainbow trajectory of the 7.62×39, shooting Palmetto AR in 7.62×39, my groupings have been sub-MOA at the range. Moreover, firing from Palmetto State Armory KS-47 with the chevron tip zeroed at 50 yards, we were able to hit an 8-inch steel plate at 300 yards while shooting prone off of a front bag.

The Primary Arms Cyclops comes with capped turrets that are tool adjustable and have positive ½ MOA clicks that are surprisingly tactile.

Worry not! It comes with a mount that puts it at absolute co-witness height.

Further, once can get the American Defense CAS-V height mount for absolute co-witness.

Of course, you can cowitness the Primary Arms 1x prism scope with iron sights, but there’s some distortion involved. If mounted using a well-made true co-witness mount, the 1x20mm Compact Prism Scope ACSS Cyclops will have a proper height to co-witness front sight post on an AK style rifle or offer a lower 1/3 co-witness in line with AR-pattern rifles.

The Primary Arms ACSS Cyclops package includes few excellent mounting options that come right out of the box. Utilizing this modular base design, you can configure this prism scope’s height or customize it for the firearm you choose to mount it on.

Since most shooters bought this prism scope for use on AR-15 type platforms, by default, they are using a 1913 MIL-STD Picatinny mount with an extended-height to allow for good sight alignment with standard height AR iron sights.

This innovative Picatinny rail mount has spacers that can be removed and adapted for lower-height mounts for other rifles or attached using Primary Arms Cyclops QD mount for those using other weapon types.

The Primary Arms Cyclops mount rail is not only compatible with Weaver or Picatinny mounting rails, but it can be easily combined with any full-size ACOG mount as it takes the ACOG screw.

It means you can mount this 1x scope out on various rifles, including AR pistol, AK style rifle, carbine length or mid-length AR-15s using dozens of excellent QD mounts available on the ACOG aftermarket.

The Primary Arms Cyclops prismatic scopes are a great alternative to red dots, and work great for people with Astigmatism.

Though you can use prismatic 1x compact scopes at longer distances, don’t forget they are basically riflescopes for sub-100-yard shots.

Get one for you today!