There are many hunters whose favorite targets are squirrels and rabbits.

In many instances, a great choice for small game hunting is a quality air rifle. There are many reasons for this choice, including the less stringent laws and ordinances addressing air rifles.

These are not your BB guns available at local big box stores. The air rifles capable of consistent accuracy and power for hunting are a different breed.

To be effective on small game such as squirrels and rabbits, the air rifle must drive the projectile greater than 900 feet per second. Accuracy is the key factor.

With low-power rifles and lightweight projectiles, shot placement is critical for clean kills.

There are many good air rifles on the market. But finding the one that fits your needs, hunting style, and budget can be a challenge.

We have scoured the marketplace and looked at hundreds of air rifles in our search for the best air rifles for small game hunting like hunting squirrels and rabbits. These air rifles represent our choices for your best options.

In any case, the preferred rifle type for small game hunting will be Pellet Guns.

What Caliber Pellet Should You Choose?

Go with .22 for small game hunting.

In general, there are three caliber choices available in air rifles suitable for hunting small game, such as rabbits and squirrels. Each caliber has pros and cons that deserve consideration when choosing a pellet rifle for hunting.

You should understand the advantages and disadvantages of each caliber as you make your decision. 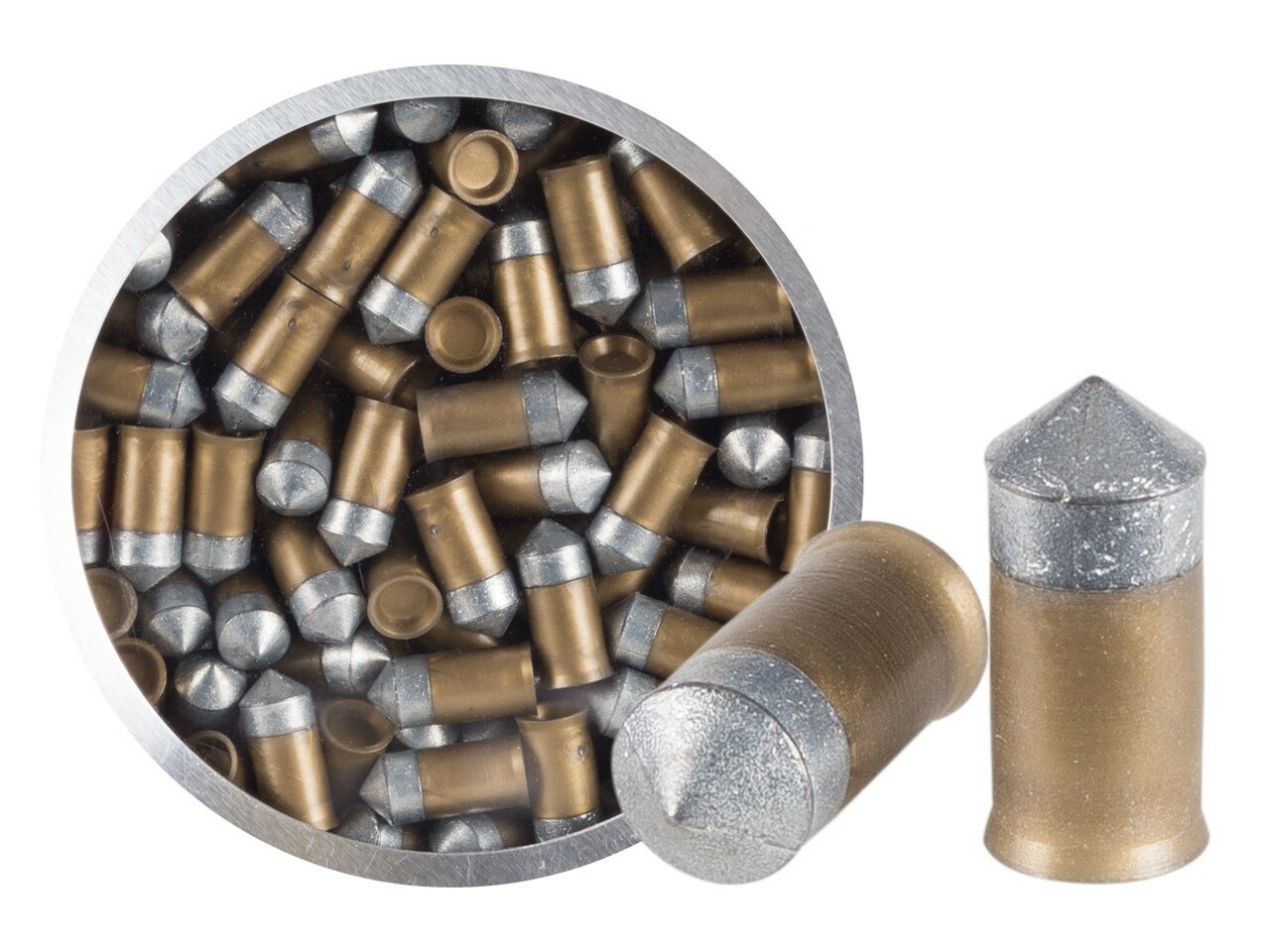 Among air rifle enthusiasts, the .177 caliber pellet remains the most popular. One great advantage of the .177 caliber rifle is the velocities you can achieve with a given amount of air gun energy available.

These higher velocities mean a flatter shooting rifle which many shooters appreciate for accuracy reasons.

Most air rifles suitable of r hunting rabbits or squirrels in .177 caliber develop around 1000 fps. This is generally considered the minimum muzzle velocity required for clean kills on small game.

The accuracy of many of these air rifles chambered for .177 pellets makes them suitable for target shooting as well. 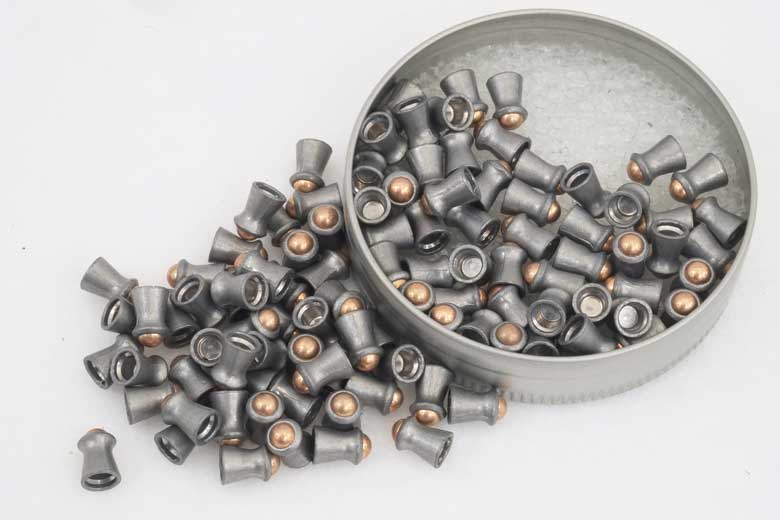 A great advantage to choosing an air rifle chambered for .22 caliber pellets is the gain in weight.

The heavier weight of the pellet gives greater knockdown power downrange. Depending on the size and weight of your target, this can be a huge advantage.

On the other side of the coin, .22 caliber air rifles have a much shorter effective range than the .177 caliber rifles.

At best, you can expect effective ranges between 45 – 50 yards.

If you are hunting varmints such as crows, raccoons, woodchucks, or jackrabbits, a .22 caliber air rifle is a great choice.

Not as many shooters are aware that many air rifles are chambered for a .25 caliber pellet.

This is typically the largest projectile available in what are still considered pellet rifles.

The increased size and weight of the .25 caliber pellet improve the pellet’s delivered energy to your target.

However, as weight increases, the effective range can also decrease.

One other disadvantage to air rifles that can drive the larger .25 caliber pellet is increased cost.

Air guns capable of developing the necessary energy to get the .25 caliber pellet up to a muzzle velocity suitable for hunting tend to be on the expensive side.

Our Picks for Best Air Rifles for Hunting Squirrels and Rabbits:

Of the many pellet rifles on the market, this is a very short list of what we consider to be the best options for hunting squirrels and rabbits.

We have chosen a variety of styles and types of pellet rifles for our list.

Benjamin has been making air guns of all styles, sizes, and types for many years.

The Benjamin brand name is recognizable by all shooting enthusiasts.

It is no wonder that the Benjamin Marauder makes our list of air rifles for squirrels and rabbits.

One great advantage to the Benjamin Marauder line of air rifles is the accuracy of these air guns.

You can order a Marauder with either a Crosman barrel or a Lother Walther barrel.

You also get a choice of calibers up to .25. Caliber. Benjamin doesn’t skimp in other features included with the Marauder air rifle.

What Shooters Say about the Benjamin Marauder

By and large, shooters of the Benjamin Marauder rave about their air rifles. The many comments found from Marauder shooters fall into these general categories.

There are some minor downsides to the Benjamin Marauder air rifle. In general, these comments reflect some users’ concerns:

Despite the few shortcomings, the Benjamin Marauder is a great value in an air rifle that will perform in the field or on the range.

The street price for this rifle is well within the budget of most serious air gun shooters and hunters.

For that price, you will get excellent and reliable performance.

AirForce Air Rifles may not be the household known name of other air rifle manufacturers, but among avid air gun shooters, AirForce is a recognized leader.

The company makes it known that their air rifles can take some of the larger game animals in North America, where it is legal.

For hunting squirrels and rabbits, the AirForce Condor SS is a great choice.

You will get the expected features with an AirForce air rifle, such as: 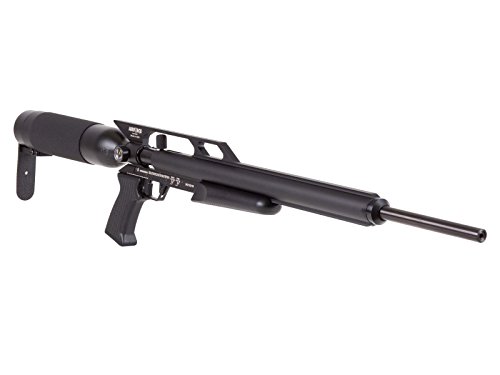 What Shooters Say about the Airforce Condor SS

Overall, shooters are extremely complimentary about the AirForce Condor SS Air Rifle. Their remarks fall into these types of categories.

There are some factors about the AirForce Condor SS to consider before making your purchase.

AirForce is a Texas company that designs and produces its air rifles in the US.

The customer service from AirForce is, by all standards, excellent when a problem does arise.

These rifles are a bit pricey but well worth the extra investment for a quality air rifle that will give you years of service.

If you want the tactical look for your air rifle. The Hatsan BullBoss is a great choice.

Modeled after the most popular tactical rifles, the Hatsan BullBoss packs an astounding array of features and power into one of the shortest frames in the air rifle market.

At only 36 inches overall, the Hatsan BullBoss is compact and easy to maneuver in the heaviest brush.

Every Hatsan BullBoss comes with an integrally suppressed barrel for the quietest shooting experience you can imagine.

You won’t find the Hatsan BullBoss lacking in features. 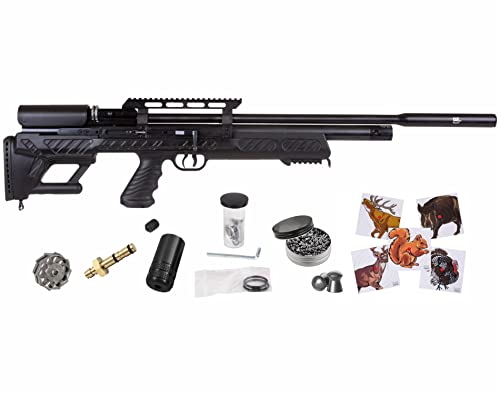 What Shooters Say about the Hatsan BullBoss

A review of user comments finds most shooters using a Hatsan BullBoss are above average. In general, the comments follow these trends.

Despite a few minor issues, the Hatsan BullBoss air rifle is a great value for an air rifle capable of taking down squirrels and rabbits.

Getting off a quick follow-up shoot with a quiet rifle can be a huge advantage on multiple targets.

If you are a purest and want an air rifle that looks and feels like a rifle, the Benjamin Nitro Piston XL is your choice. The Benjamin Nitro XL features a wooden thumb-hole stock with integral cheek rest. Not only does this air rifle shoot above average, if you like the look of a traditional hunting rifle, this one fits the bill.

This is not just a good-looking rifle. The Benjamin Nitro XL is also a performer.

This rifle can launch pellets at 1,100 fps, making it a perfect choice for small game such as squirrels and rabbits.

With the reputation of Benjamin, you can expect to get a full-featured air rifle of high quality and reliability.

What Shooters say about the Benjamin Nitro XL Air Rifle

Overall, shooters of the Benjamin Nitrol XL are positive in their comments. Surveying shooters about this air rifle found comments that fit into these categories.

On the other hand, some shooters found some inadequacies in the Benjamin Nitro Air Rifle.

Admittedly, this is not the air gun for a lot of people. Many shooters want something more futuristic. However, if you prefer the traditional look and feel of a rifle, the Benjamin Nitrol XL is a perfect choice.

You will get the performance and the looks you want at a very reasonable cost. 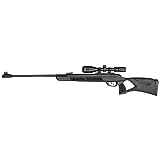 One of the hardest-hitting air rifles available in .22 caliber is the Gamo Magnum Air Rifle. Gamo advertises that the Magnum air rifle can produce 1,300 fps of muzzle velocity.

This puts the Gamo Magnum air rifle near the top of the charts. The more traditional look of the thumb-hole stock on the Gamo rifle is another plus with some shooters.

Gamo has put the features into this rifle that are the most popular with shooters.

This includes a two-stage adjustable trigger, rubberized grips, and the IGT Mach 1 air valve system for increased accuracy and consistency. Among the other features you will find:

What Shooters say about the Gamo Magnum Air Rifle

There are some negative comments about this air rifle as well. Typically, those comments regard these categories.

If you want the highest possible muzzle velocities, the Gamo Magnum air rifle is good. This break barrel design will deliver excellent power.

However, it may take some experimenting to find the best pellet weight and material to get the best performance from this air rifle.

What Size Air Rifle Will Kill a Squirrel and Rabbit?

Any quality air rifle shooting one of the three most popular caliber pellets can kill a squirrel or a rabbit. If you want to seriously hunt with an air rifle, no matter the caliber of pellet, a minimum muzzle velocity of 1000 fps is recommended.

More often than not, your success will depend on the rifle but your ability to stalk, locate, and shoot accurately when the time comes. Any gun, even a pellet rifle, will only perform as well as you can perform.

Do You Need a Scope for an Air Rifle?

In general, yes. Higher-end air rifles suitable for hunting small game don’t come with iron sights but have rails built onto the receiver to mount a scope. Some manufacturers include a small scope as part of the gun package.

However, most shooters opt to ditch the included cheap scope and put a better quality scope on their air rifle.

What’s the Best Range for Hunting Squirrels and Rabbits?

Your effective hunting range depends on several factors. All work together to determine the best range you should consider when hunting squirrels and rabbits with a pellet rifle. In general, you shouldn’t expect your pellet rifle to be effective and accurate past 50 yards.

Searching for that perfect air rifle is not much different than looking for the perfect conventional rifle.

The rifle must fit your needs and expectation as well as your hunting or target shooting style.

There are many different options from which to choose.

These are, in our opinion, excellent choices for the different designs and styles of air rifles.